Switzerland is one of the most nature and scenery-wise country in the world, and not only scenery but also History which was started long ago in the 19th century, it was born out of its 1874 constitution and passed the 1st world war and also the 2nd  which in both it remained neutral. Despite the presence of global institutions and international cooperation, these days Switzerland remains idiosyncratic and staunchly uniquie.

Modern Swiss history might start in 1291, but that's not to say that the thousands of years leading up to Switzerland’s birth are not significant – this was the period that gave Switzerland the best of its châteaux and schlösser (castles).

The earliest inhabitants were Celtic tribes, including the Helvetii of the Jura and the Mittelland Plain, and the Rhaetians near Graubünden. Their homelands were first invaded by the Romans, who had gained a foothold under Julius Caesar by 58 BC and established Aventicum (now Avenches) as the capital of Helvetia (Roman Switzerland). Switzerland’s largest Roman ruins are at Augusta Raurica, near Basel. By AD 400, Germanic Alemanni tribes arrived to drive out the Romans.

The Alemanni groups settled in eastern Switzerland and were later joined by another Germanic tribe, the Burgundians, in the western part of the country. The latter adopted Christianity and the Latin language, sowing the seeds of division between French- and German-speaking Switzerland. The Franks conquered both tribes in the 6th century, but the two areas were torn apart again when Charlemagne’s empire was partitioned in 870.

When it was reunited under the pan-European Holy Roman Empire in 1032, Switzerland initially was left to its own devices. Local nobles wielded the most influence: the Zähringen family, who founded Fribourg, Bern and Murten, and built a fairy-tale castle with soaring towers and red turrets in Thun in the Bernese Oberland; and the Savoy clan, who established a ring of castles around Lake Geneva, most notably Château de Morges and the magnificent Château de Chillon, right on the water’s edge near Montreux.

When the Habsburg ruler Rudolph I became Holy Roman Emperor in 1273, he sent in heavy-handed bailiffs to collect more taxes and tighten the administrative screws. Swiss resentment grew quickly.

Rudolph I died in 1291, prompting local leaders to make an immediate grab for independence. On 1 August that year, the forest communities of Uri, Schwyz and Nidwalden – so the tale goes – gathered on Rütli Meadow in the Schwyz canton in Central Switzerland to sign an alliance vowing not to recognise any external judge or law. Historians believe this to be a slightly distorted version, but, whatever the scenario, a pact does exist, preserved in the town of Schwyz. Displayed at the Bundesbriefmuseum, the pact is seen as the founding act of the Swiss Confederation, whose Latin name, Confoederatio Helvetica, survives in the ‘CH’ abbreviation for Switzerland (used, for example, on oval-shaped car stickers and as an internet domain extension).

In 1315, Duke Leopold I of Austria dispatched a powerful army to quash the growing Swiss nationalism. Instead, the Swiss inflicted an epic defeat on his troops at Morgarten, which prompted other communities to join the Swiss union. The next 200 years of Swiss history was a time of successive military wins, land grabs and new memberships. The following cantons came on board: Lucerne (1332), Zürich (1351), Glarus and Zug (1352), Bern (1353), Fribourg and Solothurn (1481), Basel and Schaffhausen (1501), and Appenzell (1513). In the middle of all this, the Swiss Confederation gained independence from Holy Roman Emperor Maximilian I after a victory at Dornach in 1499. 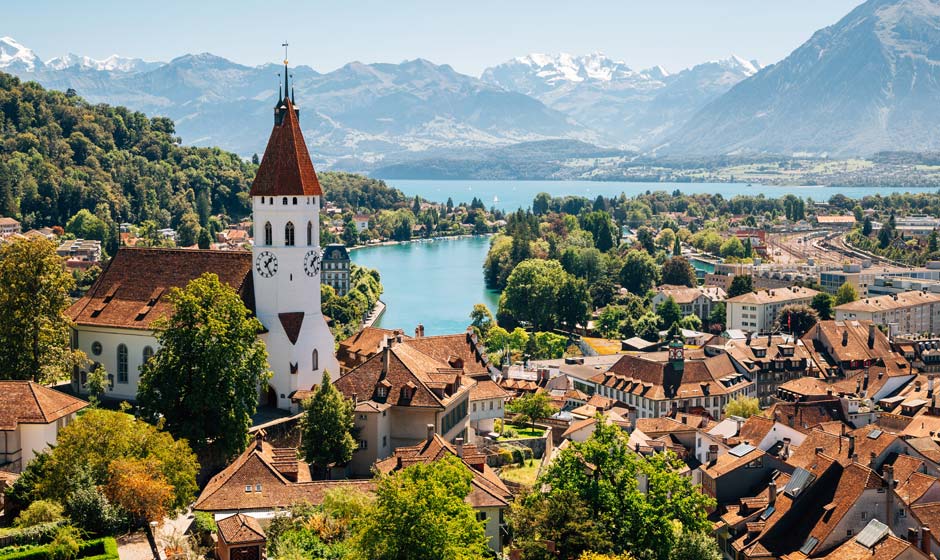 Swiss neutrality was essentially born out of the stinging defeat that the rampaging Swiss, having made it as far as Milan, suffered in 1515 against a combined French and Venetian force at Marignano, 16km southeast of Milan. After the bloody battle, the Swiss gave up their expansionist dream, withdrew from the international arena and declared neutrality for the first time. For centuries since, the country’s warrior spirit has been channelled solely into mercenary activity – a tradition that continues today in the Swiss Guard that protects the pope at the Vatican.

When the religious Thirty Years' War (1618–48) broke out in Europe, Switzerland’s neutrality and diversity combined to give it some protection. The Protestant Reformation led by preachers Huldrych Zwingli and Jean Calvin made some inroads in Zürich and Geneva, while Central Switzerland (Zentralschweiz) remained Catholic. Such was the internal division that the Swiss, unable to agree even among themselves as to which side to take in the Thirty Years' War, stuck to neutrality.

The French invaded Switzerland in 1798 and established the brief Helvetic Republic, but they were no more welcome than the Austrians before them, and internal fighting prompted Napoleon (then in power in France) to restore the former Confederation of Cantons in 1803 – the cantons of Aargau, St Gallen, Graubünden, Ticino, Thurgau and Vaud joined the confederation at this time.

Swiss neutrality as it exists today was formally established by the Congress of Vienna peace treaty in 1815 that, following Napoleon’s defeat by the British and Prussians at Waterloo, formally guaranteed Switzerland’s independence and neutrality for the first time. (The same treaty also added the cantons of Valais, Geneva and Neuchâtel to the Swiss bow.)

Despite some citizens’ pro-German sympathies, Switzerland’s only involvement in WWI lay in organising Red Cross units. After the war, Switzerland joined the League of Nations, but on a strictly financial and economic basis (which included providing its headquarters in Geneva) – it would have no military involvement.

WWII likewise saw Switzerland remain neutral, the country unscathed bar some accidental bombings on Schaffhausen in April 1944, when Allied pilots mistook the town in northeastern Switzerland for Germany, twice dropping bombs on its outskirts. Indeed, the most momentous event of WWII for the Swiss was when Henri Guisan, general of the civilian army, invited all top military personnel to Rütli Meadow (site of the 1291 Oath of Allegiance) to show the world how determined the Swiss were to defend their own soil.

In 1847, civil war broke out. The Protestant army, led by General Dufour, quickly crushed the Sonderbund (Special League) of Catholic cantons, including Lucerne. The war lasted a mere 26 days, prompting German chancellor Otto von Bismarck to subsequently dismiss it as ‘a hare shoot’, but for the peace-loving Swiss, the disruption and disorder were sufficient to ensure they rapidly consolidated the victory by Dufour’s forces with the creation of a new federal constitution. Bern was named the capital.

The 1848 constitution, largely still in place today, was a compromise between advocates of central control and conservative forces who wanted to retain cantonal authority. The cantons eventually relinquished their right to print money, run postal services and levy customs duties, ceding these to the federal government, but they retained legislative and executive control over local matters. Furthermore, the new Federal Assembly was established in a way that gave cantons a voice. The lower national chamber, the Nationalrat, has 200 members, allocated from the 26 cantons in proportion to population size. The upper states chamber, the Ständerat, comprises 46 members, with two per canton.

Opposition to political corruption sparked a movement for greater democracy. The constitution was revised in 1874 so that many federal laws had to be approved by national referendum – a phenomenon for which Switzerland remains famous today. A petition with 50,000 signatures can challenge a proposed law; 100,000 signatures can force a public vote on any new issue.

Banking confidentiality, dating back to the Middle Ages, was enshrined in Swiss law in 1934 when numbered (rather than named) bank accounts were introduced. The Swiss banking industry has, for the most part, thrived ever since, thanks mainly to the enviable stability that guaranteed neutrality brings. When the Bank for International Settlements (BIS; the organisation that facilitates cooperation between central banks) chose Basel as its base in 1930 it was for one good reason: Switzerland was a neutral player.

In the late 1990s, a series of scandals erupted, forcing Switzerland to start reforming its famously secretive banking industry, born when a clutch of commercial banks was created in the mid-19th century. In 1995, after pressure from Jewish groups, Swiss banks announced that they had discovered millions of dollars lying in dormant pre-1945 accounts and belonging to Holocaust victims and survivors. Three years later, amid allegations they’d been sitting on the money without seriously trying to trace its owners, Switzerland’s two largest banks, UBS and Credit Suisse, agreed to pay US$1.25 billion in compensation to Holocaust survivors and their families.

Switzerland has long been a favourite spot for the wealthy to deposit their fortunes in private banks, hence the immense pressure on Switzerland since 2009 from the US, Britain, Germany and other high-tax countries to change its 1934 banking law protecting depositors accused of tax evasion by their home countries.

The Swiss conceded, prompting critics to triumphantly ring the death knell for Swiss banking secrecy. Amid the hand-wringing, Wegelin, Switzerland's oldest bank, shut up shop in 2013, after pleading guilty in the US to aiding tax evasion. That same year, Switzerland and the US signed a joint statement allowing Swiss banks to voluntarily cooperate with US authorities on the issue of tax evasion. In 2014 Switzerland's second-largest bank, Credit Suisse, pleaded guilty to criminal wrongdoing in the form of conspiring to aid tax evasion over many years. The bank agreed to pay US$2.6 billion in penalties.

The era of secret Swiss bank accounts may soon be at an end: new rules set to come into effect by 2018 will ensure that account details are shared with the tax authorities of other nations, in line with international transparency standards.

Since the end of WWII, Switzerland has enjoyed an uninterrupted period of economic, social and political stability – thanks, in predictable Swiss fashion, to the neutrality that saw it forge ahead from an already powerful commercial, financial and industrial base while the rest of Europe was still picking up and rebuilding the pieces broken during the war. Zürich developed as an international banking and insurance centre, and the World Health Organization and a range of other international bodies set up headquarters in Geneva. To preserve its neutrality, however, Switzerland chose to remain outside the UN (although Geneva has hosted its second-largest seat after the main New York headquarters from the outset) and, more recently, the European Union.

A hefty swing to the conservative right in the 2003 parliamentary elections served to further enhance Switzerland’s standing as a nation staunchly apart. In 2006, the anti-EU, anti-immigration Swiss People’s Party (SVP) called for the toughening of immigration and political-asylum laws; the policies were passed with an overwhelming majority at a national referendum. Then there was the rumpus over the right-wing bid to ban the building of new minarets for Muslim calls to prayer – an idea that aroused much anger internationally but was approved by the constitution after 57.7% of voters said yes to the ban in a referendum. During the campaign, the SVP published anti-immigrant posters featuring three white sheep kicking one black sheep off the striking white cross of the Swiss flag.

In spite of the SVP’s tough conservative line, there have been definite signs that Switzerland is opening up to the wider world. The country became the 190th member of the UN in 2002 (a referendum on the issue had last been defeated in 1986) and three years later it voted to join Europe’s passport-free travel zone, Schengen (finally completing the process at the end of 2008). In another referendum the same year, the Swiss narrowly voted in favour of legalising civil unions (but not marriage) for same-sex couples ­­– one more defeat for the SVP.

Yet few expect Switzerland to even consider joining either the EU or the euro zone any time soon (if ever). Traditionally, the western, French-speaking cantons are more sympathetic to the idea, while the German-speaking cantons (and Ticino) have generally been opposed.